The church of Apple has spoken, and it has decreed that the iPhone X notch is actually good and everyone shall follow suit. Go forth and shamelessly copy. iMen.

The iPhone X’s divisive “notch” (if the design of a smartphone can be divisive in these politically challenging times) has, perhaps unsurprisingly, now become the standard smartphone design.

Well, at least according to the amount of Android manufacturers brazenly copying Apple's design that are currently on sale. There currently exists a generous handful of manufacturers -mostly Chinese brands you haven’t heard of - producing phones that have clearly taken some ‘inspiration’ from the iPhone X. And these are the legitimate outfits, I suspect a trip to Shenzhen - the bootleg metropolis - will reveal hundreds of straight-up copies.

More recognizable names like Huawei, ASUS and LG have produced - or are rumored to be making - notch-clad smartphones this year. Subsequently ditching the pretense of feeding off of Apple’s crumbs. What’s worse is that many of the devices don’t actually look very good.

Apple’s logic with the notch was that it could remove virtually all bezels, but obviously, there needs to be space for sensors, camera and speaker. So everything is crammed into that black gap. There’s also the benefit of it being instantly recognizable and therefore a useful marketing tool and differentiator. It looks strange to my eye, but logically makes sense.

Android manufacturers that have copied this have bottom bezels, like the leaked image of the P20 above. So not only is the top notch asymmetrical with the bottom bezel, it’s also unnecessary. It looks worse than just having the standard top and bottom bezels, which, whilst on its way out as a design principle, still looks completely fine.

So what these copycats end up with is the disdain that comes with brazenly mimicking a competitor’s design, but also the consumer frustration of not even doing it very well. 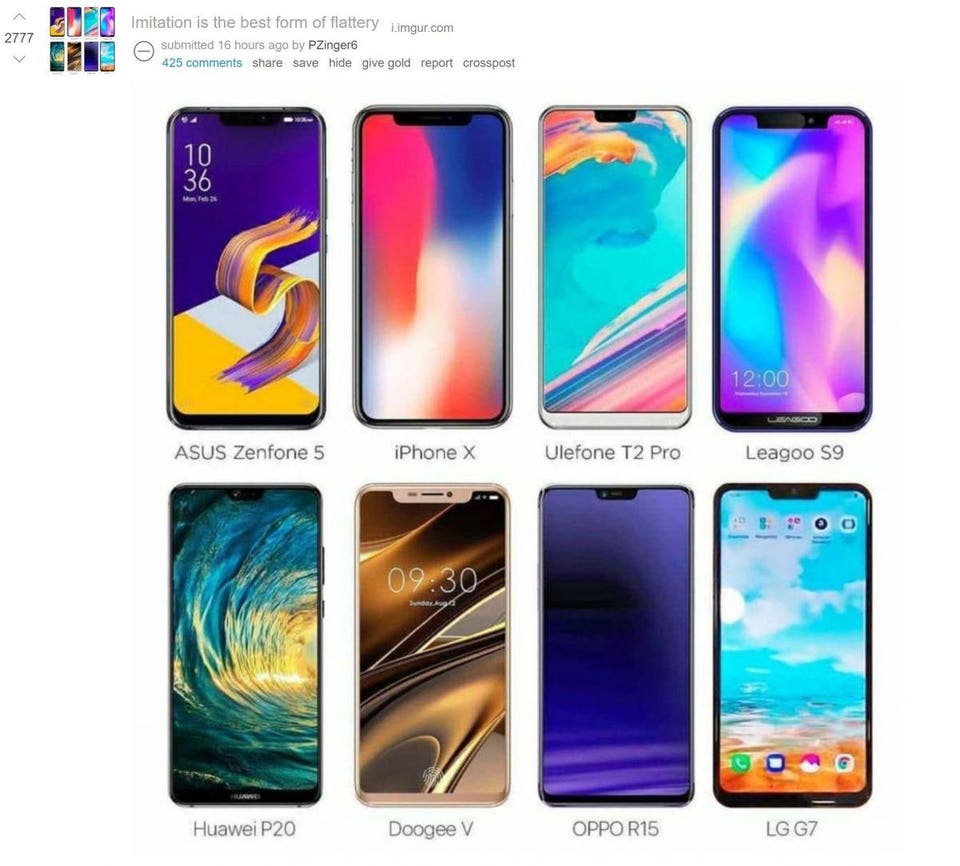 You have to feel bad for these Android OEMs because they’re clutching at anything that will give them a chance to survive for another year - and copying Apple can be big business.

To be completely fair, smartphone design is heading toward a translucent slab of glass anyway, so handsets will all look largely the same at some point (they pretty much already do.