iOS 13 Now Installed on 81% of All Compatible iPhones 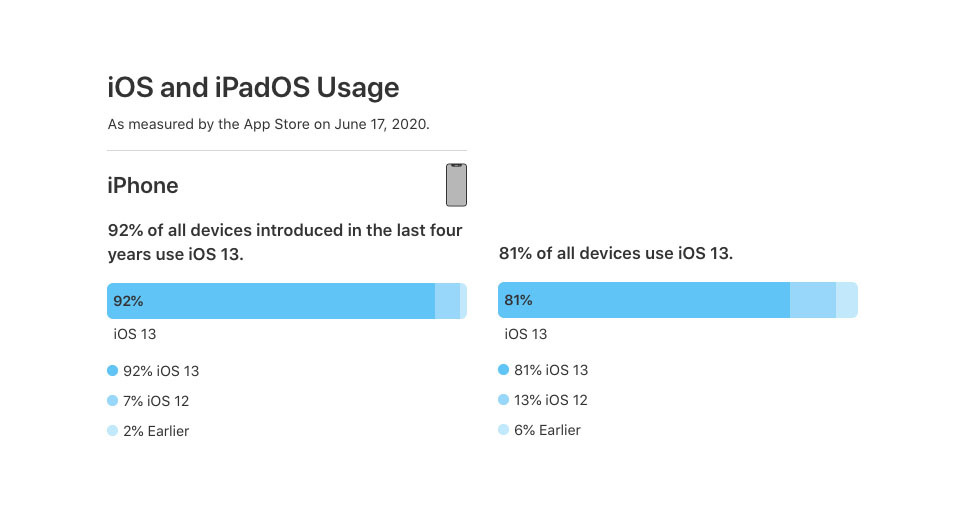 Apple on Friday released new iOS adoption statistics that indicate iOS 13 is installed on 81% of all compatible iPhones.

The new iOS figures, revealed in an update to Apple's App Store developer support webpage ahead of 2020's virtual Worldwide Developers Conference, also show that iOS 13 is installed on 91% of iPhones released within the last four years.

Based on the numbers, only 7% of devices within the last four years and 13% of all compatible devices are running the previous iOS 12 update.

Apple also said that 93% of iPads released in the last four years are running iPadOS. The percentage for all iPads ever released is a bit lower than iPhones, with a 73% adoption rate.

Like iOS 12, iOS 13 has seen a fairly rapid adoption rate. By October 2019, iOS 13 was running on 50% of all compatible devices and 55% of devices released in the four years prior.

Apple's iOS 13 update was released alongside the iPhone 11 and iPhone 11 Pro updates in September 2019. It introduced new features like Dark Mode and Sign In with Apple, as well as a revamped iPad-specific variant.

Apple is widely expected to debut its iOS 14 operating system update on Monday, June 22 during the WWDC 2020 keynote.

Apple Still Signing iOS 11.3 Beta 5/6, Downgrade to It to Jailbreak Your iPhone Backup Your iOS Device When It's Disabled or in Password in Normal Mode ICCID Activation Bug can Factory Unlock Any iPhone with a Turbo SIM How to Download Apple’s Official iOS IPSW with One Simple Step? iPhone X to be Available in New "Blush Gold" Color on Jan, 2018 PanGu Won’t Release iOS 10.3.1 jailbreak Tool? iFixit Releases Fun x-ray and Internal Wallpapers for iPhone XR Apple iPhone 7 Plus with Leaked Photos and iPhone 7's Packaging Box